Tickets On Sale for Flashback Weekend 2009!

Tickets for the Eighth Annual Flashback Weekend Chicago Horror Convention are now on sale! Visit http://www.flashbackweekend.com tickets.html for details and to order yours!

Writer/Director/Producer/Actor Jason Paul Collum will be appearing as well.

Jenette Goldstein, the actress who gave us 2 of horror's strongest female characters (Vasquez from Aliens and Diamondback from Near Dark), has been confirmed as a celebrity guest for Flashback Weekend 2009, reuniting with fellow Aliens/Near Dark castmate Lance Henriksen.

The convention hotel has also been confirmed as the Wyndham O'Hare. Visit http://www.flashbackweekend.com/hotel.html to make your reservations now! 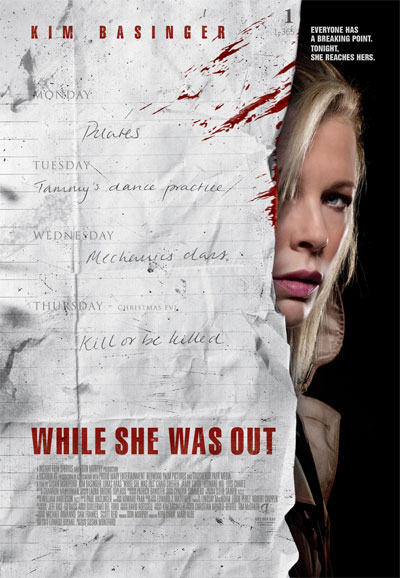 We are proud to present the Midwest premiere and first Drive-In screening ever of the new Horror-Thriller from Anchor Bay Entertainment:

WHILE SHE WAS OUT

Starring Kim Bassinger. In the vein of female revenge/empowerment films such as “I SPIT ON YOUR GRAVE” and Quentin Tarantino’s “DEATH PROOF”, “WHILE SHE WAS OUT” tells the story of an abused housewife (played by Kim Bassinger) who is targeted for rape and murder by a gang of vicious thugs. She finds herself stranded in the woods armed with a toolbox while the gang closes in on her. The gang members find out how dangerous a woman pushed to the breaking point can be!

The evening will also feature classic coming attractions, vintage concession ads, prize raffles between the films and more!This is your chance to support horror films at the box office AND to be able to enjoy an evening of great horror in the comfort of your own car.

The Midway Drive-In (located between Sterling and Dixon Illinois in Northern Illinois) is the oldest operating Drive-In in Illinois. The Midway projection booth has been upgraded with a new projector and lamp house for an incredible presentation! The concession stand has been remodeled into a classic 50’s diner look, so be sure to visit the concession stand for all of your dining and snacking needs!

Flashback Weekend 2009 has added Tony Todd, Mercedes McNab and Svengoolie to the celebrity guest line-up, and has confirmed the annual Costume Contest hosted by Svengoolie and the third annual Zombie Pinup Beauty Pageant!

Tony Todd is one of the most recognizable faces (and voices) in horror and sci fi on both the small and big screen. Perhaps best known as the iconic Candyman, Tony also reprised the role of Ben in the criminally under-rated 1990 remake of Night of the Living Dead, and has brought dozens of other characters to life in movies, TV, animated shows and video games, often creating a memorable character in only one scene, as in Hatchet and Final Destination.

Mercedes McNab knows something about playing the villain, as well. As a child in The Addams Family and Addams Family Values, she played the overprivileged Girl Scout Amanda Buckman, representative of everything the Addamses loathed. A decade later, she joined the cast of Buffy the Vampire Slayer (and, later, Angel) as ditzy cheerleader-turned-vampire Harmony Kendall, one of the funniest characters either series produced. Mercedes also starred in Hatchet, last year's Dark Reel and the upcoming Medium Raw.

Flashback Weekend is very pleased to announce that Chicago legend Svengoolie will be returning to join us on Saturday, October 24th, for autographs, photos, a Q&A and to host our annual Costume Contest.

That's right - October! When better to celebrate All Things Horrific?

The annual Flashback Weekend Costume Contest and the Zombie Pinups Beauty Pageant sponsored by Sinister Visions inc. will be back as well as a huge Horror dealers room, awesome Horror celebrity guests, Halloween parties, live horror theatre from Chad Wise and the NMTC, special events, great prize giveaways from HauntedHouseChicago.com and our presenting sponsor Anchor Bay Entertainment and much more!

The convention will take place in Rosemont, but we're still working out the specifics - please mark the dates and visit our site www.flashbackweekend.com for updates. We look forward to seeing you in October!